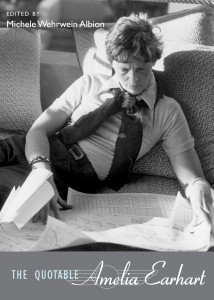 A fearless pioneer and a record-breaking pilot, Amelia Earhart engaged the nation and the world when she became the first woman to fly solo across the Atlantic. Today people remember her most for her disappearance on the last leg of her round-the-world flight in 1937. But more than a record breaker or a ghost lost over the Pacific, Earhart was ambitious, driven, and strong at a time when all three of these traits were considered unfeminine. Earhart’s words and her example encouraged women to step beyond the narrow confines of their traditional roles.

The Quotable Amelia Earhart brings together statements from a variety of sources
and covers a wide range of topics, including Earhart’s flights and her opinions on politics, work, religion, and gender equality. This definitive resource provides a concise, documented collection of Earhart’s quotations so that her words, as well as her achievements, may inspire a new generation. 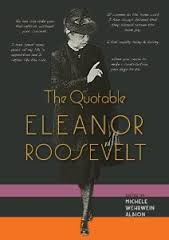 Born in the late 1800s, to one of the wealthiest families in New York City, Eleanor Roosevelt seemed destined for a traditional woman’s role within a sedate life. Instead, she married her fifth cousin and was flung into the highest levels of American politics, culminating in Franklin’s unprecedented four-term presidency.

While previous first ladies refrained from public discussion of their personal views, Eleanor’s bold opinions on political, social and racial issues took many by surprise. She held press conferences and wrote a syndicated column. She spoke at national conventions, granted interviews, and often made appearances on her husband’s behalf. Her own influence lasted years beyond his death. She advocated for human rights, worked with the United Nations, and supported what later became the civil rights movement.

The fascinating quotes in this collection are the words of an articulate, honest, and thoughtful woman. Of war, she said, “I hope the day will come when all that inventing and mechanical genius will be used for other purposes.”  At a time when racism prevailed, Eleanor said, “We must be proud of every one of our citizens, for regardless of nationality, or race, every one contributes to the welfare and culture of the nation.” 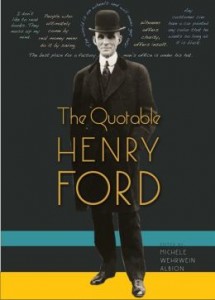 Brilliant businessman, successful entrepreneur, pioneer of the low-price, mass-produced motor vehicle, and profoundly important to twentieth-century American life, Henry Ford was also a character of little-known but surprising contradictions. He sported a hefty ego, yet suffered from a pathological dislike of public speaking. He pioneered forty-hour work weeks and a minimum wage, yet hated labor unions. He was a pacifist yet admired the efficiency of Nazi Germany. Such fascinating inconsistencies stand out sharply in The Quotable Henry Ford, an uncompromising presentation of the automaker’s own voice on a wide range of topics.

After the Model T made him famous, the automobile manufacturer began to see himself as a philosopher in the vein of Ben Franklin or Ralph Waldo Emerson. He kept notebooks of comments and pithy sayings, reworking them to get the wording just right, even if the spelling or grammar were not. As Ford became even more renowned, an eager public hung on his every syllable, hoping they too would discover the key to wealth and fame. 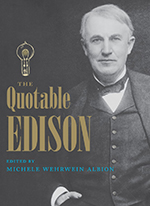 The Quotable Edison offers a wealth of his insightful, enlightening, and sometimes humorous comments and witticisms on a wide range of subjects, from business to politics, from religion to nutrition, from advice to boys to opinions on women’s clothing.

Famous for his dictum that â€œGenius is one percent inspiration, ninety-nine percent perspiration,â€ Edison offered many other gems.

On religion: “Satan is the scarecrow of the religious cornfield.”

On the English:  “The English are not an inventive people; they don’t eat enough pie.”

On work and business: “Ive been working two shifts most of my life. Lots of other men work two shifts too, but [they] devote the other one to poker.”

On the law:  “A lawsuit is the suicide of time.”

And his reported final words: “It’s very beautiful over there.”

The Florida Life of Thomas Edison 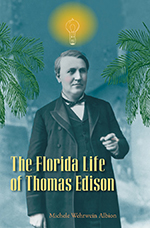 From 1885 until his death in 1931, Edison wintered in the sleepy Gulf Coast town of Fort Myers, south of Tampa. There, he was the pride of the small town, which eagerly watched to see what magic the Wizard would conjure. The local newspaper chronicled Edison’s local experiments, his establishment of a laboratory in town, and his unsuccessful efforts to electrify the area.

Using a wide range of little-known resources, including photographs, manuscripts, maps, and newspaper accounts, Michele Albion explores an important facet of Edison’s life that is largely unknown. In doing so, she presents the full story of his professional and leisure time while on holiday. Particularly interesting is the impact his wife, Mina, had on the culture and community of Fort Myers. The Florida Life of Thomas Edison reveals how the Edisons’ legacy influenced women’s history, environmental history, black history, and Florida history.